For our Sunday morning walk we decided to go for a drive to Whangaruru North Head Reserve. As far as summits go this is a fairly low altitude one, but it meets the 150 meters prominence requirements so it is valid. The track starts out gentle but then starts to climb. Fortunately its not a large ascent. Just before the true summit (about 10 meters) you are treated to a view North across Bland Bay with Cape Brett summits on the skyline.

We timed this activation to catch two other ZL1 activations that were planned for this morning. Mount Tongariro ZL1/MW-003 and Pouakai ZL1/TN-002. Both of these summits are significantly higher than the summit we were on however if they could be the tallest we would try and find the shortest summit. Working Wynne ZL2ATH and Kyle ZL2KGF was a pleasure and with 59 reports each way were good to get logged. A total of 19 summit to summit points were added to the log. Nice one! A total of 16 contacts were made from this summit. 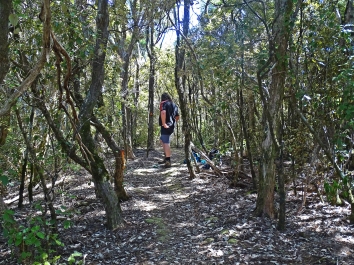 Packing up to head down we decided to take the track we came up rather than complete the loop. The sun was intense by now and we were concerned about over exertion (never mind the other activators!) Back at the car we found a beautiful bay to go swimming in. The water was calm (almost no waves at all), deep, warm, clear and we were even surrounded by a school of fish at one point. We both could have stayed in there for hours – in fact I think we may have as it was after 3 before we decided we had better head back, aborting an eyeball with a semi local ham due to our lack of time management. This is one summit I would be pleased to revisit on a warm summers day just to go for the swim at the end.

Access – SH1 – right into Russell Rd. Follow until right into Rawhiti Rd then right into Whangaruru North Road. After the Doc track sigh on the left park up the top of the rise on the right (before the Doc campground entrance). Walk back down the road and enter the track, following the well formed track to the high point.

Mobile and internet coverage from the summit – 3g coverage on Spark and Vodafone network.